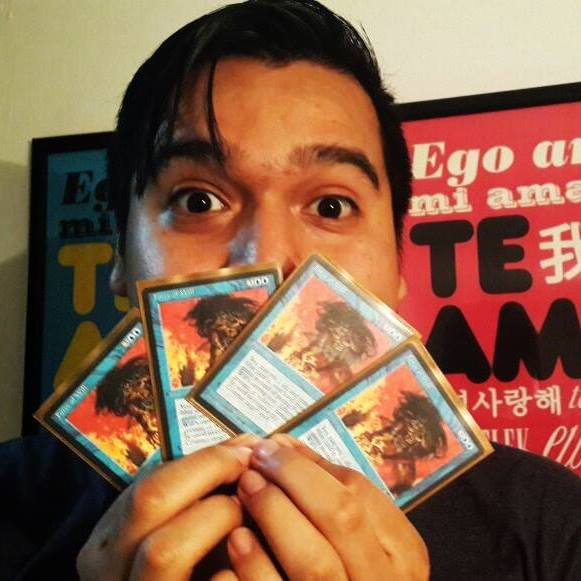 This is the story of the first MTG e-learning Academy in the world.

Spikes Academy is the result of great dreams, tenacity, tragedy, trust, frustration, luck, a lot of hard work and true love for Competitive Magic: The Gathering.

My name is Jorge Tavera, Co-founder of Spikes Academy and I'd like to share with you a bit about our company’s birth.

Spikes Academy's began as many startups often do - an idea inside the head of a very passionate person. That person happens to be my partner and good friend Andrés Piñeiro a.k.a the Pioneer. Andrés and I met playing Magic - and as you may know, Magic does a pretty good job at forging friendships. We spent a lot of time together playing and traveling to tournaments, and every once in a while we would talk about our shared dream of somehow *making a living through Magic*. If you’re reading this, there's a chance this dream has crossed your mind as well.

Andrés wasn’t happy with just dreaming about it - he was determined to make it work. Andrés has this Tenacity to make things happen that I really admire. Back in 2015 he started traveling to GPs, launched an MTG blog and reached out to a couple of Pro Players including PVDDR.

Andrés was creating an e-learning project when he approached me and said: “I want to create the first e-learning MTG course in the world, and I would like to work with you on this project”. Andrés knew that e-learning was the way to go and although I thought the idea was really cool, I wasn’t quite ready to jump into the project yet. My marketing business at the time was doing OK and my wife and I were expecting a baby girl, Leia, a.k.a. The Spark. But... life doesn’t always go as planned and we lost our baby girl in the sixth month of pregnancy. So I made the promise in honor of Leia’s memory that I was going to live the life that I dreamed of for her; a life of happiness and fulfillment - which for me, is Magic. It was time to overcome the tragedy, leave my previous business behind and jump 100% into the project.

Around that time, the idea for Spikes Academy solidified; an MTG course would've been cool, but the first MTG e-learning Academy in the world was something everyone would remember.

We identified the frustration that Professional Magic is not very well paid and knew that with Spikes Academy we could provide business opportunities for the best players in the world. We firmly believe in a professional way to learn how to play Competitive Magic.

We had the idea and the motivation but we were still just two guys that nobody knew in the MTG world. And that’s when the luck and trust came in. Andrés reached out to Paulo Vitor Damo da Rosa via twitter and asked him for a meeting. We presented the project and Paulo said: “Yes, I can do that”. I still remember the meeting; it was a Facebook call (we haven’t met Paulo in person yet) and Andrés and I did our best to not look like fans. We may have failed to hide our fandom but we did successfully get Paulo on board for the project!

It may have been business but we will be forever grateful for Paulo's trust in us and belief in the project. The first course took almost five months of development due to many meetings, discussions about the content, creating the quizzes, video recordings and so on. Five months of hard work while balancing Pro Tours, GPs and wedding plans. We didn’t have any money to pay Paulo for the creation of the first course but he trusted us from the beginning. In fact, he got so involved in the project that many people refer to Spikes Academy as “Paulo’s coaching-project-thing”. Fortunately, Paulo's course with Spike's was a great success and he was compensated just as promised.

Spikes Academy is the most fun project we have ever created. It's the best to invest hour after hour of hard work every day into creating new courses, interacting with the community on Twitter, and even working through the not so exciting steps as they've allowed us to learn and grow. We’re really happy to be Spikes Academy. Everything about this project is awesome and we hope we it grows for the years to come because like you, we are Spikes, and we love Competitive Magic: The Gathering.

"It's actually quite simple, but since you've only recently begun to walk upright, it may take some time to explain." —Jace, to Garruk Wildspeaker

Magic: The Gathering® is not only our hobby, it’s our passion. We love the game and we love to compete. We play countless hours before every tournament, we travel for days just to play, we are Grand Prix Players, PPTQ grinders, and we are here because we want more! We want to learn from the best players in the world, and we want to be hall of famers. We are Spikes and we are here to win.